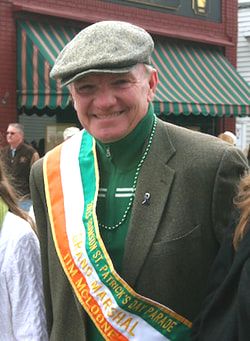 Tim McLoone could best be described as a modern-day Renaissance man.

Schooled at Harvard and accomplished in music, athletics, and business, Tim nonetheless felt there was something missing in his life back in 1993. He yearned to make a positive difference in the lives of the sick, the isolated elderly, the mentally disabled, and others in need.

That year, with the help of his friends in the music business, he founded Holiday Express, a volunteer, non-profit and non-sectarian organization dedicated to bringing music, gifts and holiday cheer to those less fortunate. The organization now includes approximately 80 professional singers and musicians who volunteer their time and more than 600 other volunteers, including school age children and adults. They work tirelessly year-round to prepare for approximately 50 events between Thanksgiving and Christmas at hospitals, nursing homes, homeless shelters, schools, and soup kitchens in the tri-state area.

Tim’s love of music was a driving force behind the creation of Holiday Express. He learned to play piano as a child and, after college, formed Tim McLoone and his Atlantic Coast Band. However, sports also had a significant influence upon his life. As an alumnus of Harvard’s All-American Track and Field Team, Tim parlayed his interest in athletics and entertaining into a career as a sports announcer. He has done broadcast work for the U.S. Olympic Trials and was part of the Emmy Award-winning broadcast team for the New York and Los Angeles Marathons. In fact, Tim put his track and field background to use when covering the New York Marathon, jogging alongside the runners as he reported on the event.

Off-camera, Tim directed the U.S. Men’s Olympic Trials in 1998 and served as musical director of the Rockefeller Center Tree Lighting Ceremony for NBC from 1998-2000. Additionally, he serves as Director of Game Operations and Arena Announcer at The Prudential Center for Seton Hall Men’s basketball and held the same position for the New Jersey Nets of the NBA.

When not touring with Holiday Express and engaging in television and sports projects, Tim can be found on many weekends performing with his band Tim McLoone and the Shirleys.

Tim resides in Little Silver, NJ. As much as he enjoys being “on the go”, Tim is very much a homebody, cherishing his free time with his wife Beth and their four children.