December 6, 1921, marked the one-hundredth anniversary of the signing of the Anglo-Irish Treaty between Great Britain and representatives of the Irish republic that put closure to the Irish War of Independence.​

This treaty supposedly provided for the establishment of a free Irish state. But instead, the signing and its insistence upon an oath of allegiance to the Crown created a deep split between Irish nationalists and anti-treaty forces that led to the assassination of Michael Collins (who upon signing the treaty proclaimed, “This would give the freedom to achieve freedom”) and Irish Civil War.
ESSAY QUESTION
What were some of the significant events that led to the signing, who were the main negotiators, what were the initial goals and what were the early outcomes? In your opinion, could bloodshed and civil war have been prevented and freedom gained as Collins hoped for?

(Click on the Title to read the entire essay)

Something Is Better Than Nothing
William Coughlin (CBA)

A Practical Compromise with a Flawed Implementation
Brady Prunty (CBA)

What were some of the significant events that led to the signing, who were the main negotiators, what were the initial goals and what were the early outcomes? In your opinion, could bloodshed and civil war have been prevented and freedom gained as Collins hoped for? 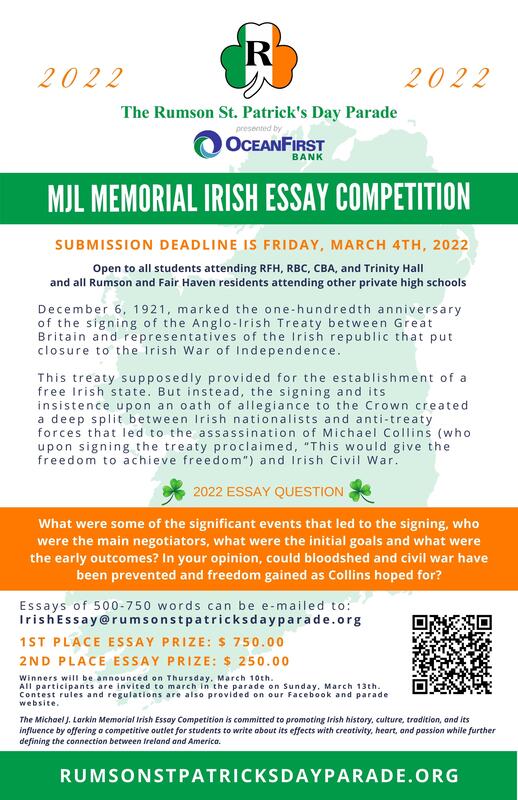 ESSAY QUESTION: Describe what the poet might have experienced through these hard times and what he means as expressed by "A terrible beauty is born” during some of the darkest times in Irish history.  (see below for Essay Background)

1916: Yeats' Fateful Date
by Lauren DeSantis
In his poem, “Easter 1916,” William Butler Yeats reacts to the Irish Easter Rising of 1916. Yeats, as a fervent Irish nationalist, was a strong proponent of Home Rule and wanted Ireland’s independence from England. However, he was horrified by the brutal violence brought by the struggle for that independence. His reaction to these terrible events caused him to conclude his poem with the observation that “A terrible beauty is born.”
The Easter Rising, also called the Easter Rebellion, was an Irish Republican uprising against the British colonial rule of Ireland. The insurrection took place on Easter Monday, April 24, 1916 when Irish forces captured a number of strategic points in the center of Dublin, including the Dublin General Post Office (“Easter Rising”). At the post office, nationalist leader Patrick Pearse proclaimed the birth of the Irish republic (“Easter Rising”). Shortly afterwards, British troops arrived to suppress the rebellion, and street fighting ensued for nearly a week. Pearse, along with several other nationalist leaders, was driven to surrender by continuous British artillery fire, and they were later executed by British authorities (“Easter Rising”).
The uprising itself was unpopular with a majority of the Irish people. The executions, however, produced a backlash against the British officials, transforming the dead republican leaders into martyrs. Thus, the Easter Rebellion marked the beginning of the revolution in Ireland. To this end, "A terrible beauty is born," proved to be prescient, as the execution of the Easter Rising leaders had the opposite effect to that intended. Their deaths sparked a resurgence of the Irish Republican movement rather than its end.
The “beauty” in the line, “A terrible beauty is born,” references the beauty of Irish independence. The desire for Irish Home Rule gained popularity after the Great Famine ended in 1849, 16 years before Yeats was born. By the time he was a young man, the notion of Home Rule as desirable must have been deeply rooted in the Irish people. In 1889, 27 years before the uprising, he joined the Irish Republican Brotherhood, a nationalist revolutionary group—the same one that counted the executed nationalist leaders, Pearse and his colleagues, among its members (Sternlicht 48).
Yeats was shocked and horrified, however, when he heard of the executions following the Easter Rebellion—what he labeled “terrible” in the poem. This event had a profound effect on Yeats. After the uprising, he distanced himself from much of the political activism of his early life and removed himself from politics, even waiting to publish his poem inspired by the rebellion until 1920, to avoid further escalating the political tension.
Ultimately, Yeats recognized that the Easter Rising signaled the beginning of the Irish Revolution. While he withdrew from political activism, Yeats remained a nationalist, making it clear that he favored a policy of endurance, passively waiting out the remainder of British colonial rule, rather than prompting further bloodshed. His poetry resonates with a message of endurance, especially endurance of these “terribly beautiful” events. Such events represent terror and death, as well as the promise of independence.

Beauty Among the Shadows
by Reagan Volk
W.B. Yeats gazed upon 485 warm corpses and saw beauty--not in death, but in its cause. In his brief but thought-provoking poem, “Easter, 1916”, Yeats writes of the Easter Rising in Ireland and how a “terrible beauty” sprung from its loins. This oxymoron punctuates the names of the four courageous Irish nationalists who led the rebellion: MacDonagh, MacBride, Connolly, and Pearse. Yeats was one among thousands of others who supported the nationalists’ demands for political freedom from the British and their oppressive government. His tears of mourning were the driving force behind his introspective and passionate lines; the escalating instability which pervaded throughout his beloved country and the unspeakable violence which resulted from it simultaneously evoked dread and hope in Irish citizens. They feared the consequences rebellion would surely yield, yet yearned for the possibility of liberation. Though the aforementioned leaders had fallen prey to the clutches of the British, the message they stood for bled through the Irish soil and permeated throughout their country long after they took their final breaths. The “terrible beauty” Yeats described is meant to draw attention to the leaders’ remarkable courage and sacrifice. However, it also highlights the grim price of independence and the consequences of allowing tension to fester into hatred and, worse, into death. His poem reflects on the ramifications of unifying against a larger-than-life force and how, oftentimes, widespread suffering can only be obliterated through the immense suffering of brave and selfless individuals. MacDonagh and his men inspired and brought power to the nationalists they led, yet never lived to see the harvest generated by the seeds of rebellion they planted. Instead, they joined the seeds beneath the soil.

As a nationalist himself, Yeats could identify with the feelings of fear and apprehension MacDonagh and his companions surely experienced. In the name of emancipation, Yeats expressed his disapproval of the British rule and willingly made himself one of the government’s targets. Like the men who marched towards death while pushing away innate urges to prioritize their own safety, Yeats was likely taunted by self-doubt as he refused to shroud his beliefs. His deep connection and understanding of the men he referenced allowed Yeats to convey complex ideas about how we must value the wellbeing of our brothers and sisters over our natural concerns for ourselves in order to spark change. This unfortunate truth has driven not only the Easter Rising but also the American Civil War, the French Revolution, and the American Revolution. Clearly, Yeats’ words ring true across the globe and on all scales; even as individuals, we must make small sacrifices daily for the welfare of others. Yeats describes how the impact and beauty of these sacrifices proliferate when we join hands with others and march in harmony for a cause that is bigger than ourselves. The fact that these four leaders were able to accept their fate with open arms--all because of their love and devotion for their homeland--continues to serve as an inspiration over a century later. Through his writing, Yeats invites others to join him in admiring and mourning those selfless enough to face Death, look him straight in the eye, and hand him the toll of freedom.

​In the aftermath of the Great Famine and ensuing economic depression of the late 19th century, Ireland witnessed the emergence of Irish nationalism spawning the notion of Home Rule (a separate Irish parliament within the Union--and land reform) with forces for it and others vowing to resist it.  Its Passage then delaying its implementation lead to rebellion and the events leading up to the 1916 Easter Rising thus planting the seeds of Civil War and the dawning of the division of Ireland.

At the same time and during a renewed Irish literary renaissance, many poets were sympathetic toward a united Ireland and this notion of self rule gravitating toward the poitical movement Sinn Fein and often wrote of these political events that were taking place.

Written soon after the Easter Rising but published several years later in the midst of civil unrest, the poet and committed nationalist, W.B. Yeats described these horrible events with haunting despair and unity as illustrated in the last stanza of the poem below:

Easter, 1916
W.B. Yeats
​
I write it out in a verse--
MacDonagh and MacBride
And Connolly and Pearse
Now and in time to be,
Wherever green is worn,
Are changed, changed utterly:
A terrible beauty is born."
Info on Submission Deadline, Prizes, and Rules:
The Deadline for submission will be Friday, Febuary 28th, 2020 at RFH HS Main Office Attn: Mrs Handerhan or at the library that evening during the Irish Soda Bread Competition between 7:00pm and 8:30pm.

Essays of 500-750 words can be e-mailed to: IrishEssay@rumsonstpatricksdayparade.org
Hard copies can also be dropped off at the Rumson Oceanic Free Library or Rumson-Fair Haven Regional High School Main Office (Attn: MJLMIEC)

Winners will be announced on the Friday prior to the Parade. All participants are invited to march on Parade Day. Contest rules and regulations are provided in more detail on our Facebook and parade website.

*Open to all residents of Fair Haven and Rumson high school students attending: RFH, CBA, RBC, TRINITY HALL, or any other vocational, public or private school.

Identify an Irish or an Irish-American person from history who demonstrated the spirit that the proverb speaks of and explain how this individual's courage has contributed to the tenacious spirit of the Irish.   ​

The Fighting Irish and the Cause for Liberty and Freedom
Preamble:
January 21, 2019 marked the 100-year anniversary of the signing of the Irish Declaration of Independence as submitted by the First Dáil Éireann, reflecting the will of their fellow countrymen’s desire for an independent Ireland. Arguably, this act is one of many throughout Irish history which demonstrates the sustained courage and tenacity among the Irish people.

There is an old Irish proverb "Níor chaill fear an mhisnigh riamh é."
Translated, the proverb means "The man of courage never lost it."

Courage has defined the Irish spirit throughout the centuries, regardless of whether it was fighting for freedom, surviving forced exile, undertaking voyages across the seas to foreign shores, working for social acceptance in new lands, striving for equal rights, or rising to positions of power.